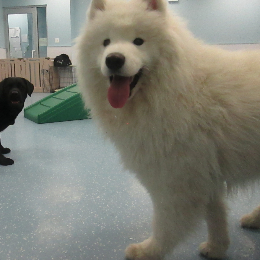 In September 2013 Gaby and Julian got a very special surprise when they came home from the first day of school: a fluffy white puppy wearing a red bow. Theirs moms, Michele and Tamara, report that there was a lot of screaming and excitement that day.

When they were picking out names the moms’ only rule was that both Gaby, now 12 years old, and Julian, now 6 years old, had to agree. Blaze is a name that the whole family liked right away.

They knew they wanted a hypoallergenic dog because of Tamara’s allergies, and they were inclined to like big fluffy dogs. Their last pet was a Keeshond named Ivan. Blaze, a Samoyed, has in common with his predecessor Ivan his upright ears, fluffy fur and curly tail.

When they take Blaze for a walk, everyone on the street wants to pet him. Tamara says, “Blaze is super strong, but very gentle.”

He has helped a number of Gaby’s friends overcome their fear of dogs with his sweet nature. He stands very still when kids gather around to pet him.

Michele tells a story about how when she was taking him for a walk in Central Park last winter when a field trip of 30 children from the Bronx encountered Blaze. At first they were terrified, but eventually the whole class lined up and had a chance to pet him one at a time.

At daycare Blaze is popular with all his friends, and one of the most energetic players in the big dog room. At home, Blaze is a very relaxed dog, sleeping under Gaby’s desk when she does her homework.

Michele attributes his calmness to her commitment to making sure Blaze gets exercise everyday. Gaby agrees: “When he doesn’t get his exercise he’s crazy.”

Mom Michele: “Well, what happens when you and your brother don’t get exercise?”