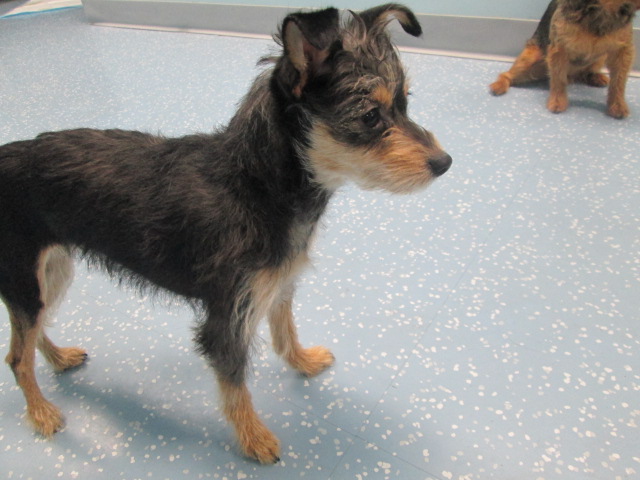 Calliope is only eight pounds, but she has a big name to live up to. Her human, Lisa Burns, a composer, named Calliope (pronounced ka LYE uh pee) for the muse of epic poetry in Greek mythology.

The canine Calliope is a nine-month-old brown and tan rescue dog, possibly a Chihuahua and Bichon Frise mix, perhaps with a bit of Yorkie or Terrier.

Calliope often hops around on three legs, but she doesn’t let it slow her down. She had surgery on her right hind knee at the ASPCA before Lisa adopted her because her joint wouldn’t stay in place. Once Calliope’s knee was fixed, Lisa discovered that the ball in Calliope’s right hind hip joint was also worn away. She had to have a second surgery.

Lisa doesn’t know if Calliope was born with the hip and knee problems or if they were the result of trauma. Calliope was kept in a basement for the first six months of her life by a woman who raised puppies to sell. The woman surrendered Calliope—previously named Tallulah—to a shelter.

Now Calliope’s joints are repaired, but she doesn’t have much muscle in her leg and has gotten used to walking on three legs. She also does hand stands on her front legs and can walk that way.

Calliope goes to Water4Dogs for physical therapy. There, she walks on a treadmill while she is up to her chest in water and swims in a pool. Lisa thinks Calliope enjoys the therapy sessions.

“She just likes having that much concentrated human attention, one on one,” Lisa said.

Lisa does a lot of home therapy as well. When Calliope goes for walks, Lisa puts a water bottle cap over the foot of Calliope’s good hind leg to force her to use the other leg.

Calliope goes to Doggedly Devoted three days a week, where she especially loves to play with Tux and Moon Unit.

“I see pictures of Calliope playing with other dogs, and I think, how could you not let your dog have that?” Lisa said of daycare.

Calliope loves to cuddle with humans and other dogs. “She’ll just be happy to sit on your lap for hours,” Lisa said.

Because Calliope is so little and so quiet in her bag, Lisa was able to sneak her into a restaurant once. While Lisa had dinner, Calliope was quiet and went undetected, though she did “poke her little nose out.”