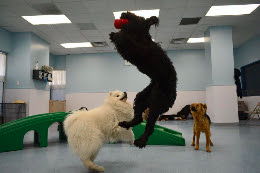 Diana and Justin decided to get a dog when they moved in together, and the search took about 6 months. During that time, Diana met a Labradoodle near where she worked and became smitten with the cross between a Labrador Retriever and Standard Poodle.

When she saw a photo of Cole, it was love at first sight. He was the only black puppy in a little of light brown and chocolate brown Labradoodle pups.

Diana grew up with German Shepherd Dogs in her native country Colombia, but Cole’s “grandma” Ismelda–Diana’s mother–would never let her have an “indoor dog.” Instead, Diana had to go to her family farm to see her dogs.

Cole has completely changed Grandma Ismelda’s opinion of dogs. DoggedlyDevoted fans may have noted Ismelda as a frequent admirer of photos of Cole onDoggedly Devoted’s Facebook wall, and now she is even thinking of getting her own indoor dog!

Diana isn’t surprised that her mom changed her mind after meeting Cole: “Cole fills the house with love. He has extra happiness that he doesn’t know how to control.”

Cole is the baby of the house (for now), and Diana and Justin love to play games with him, including “Hide and Seek” and fetch. After he comes home fromDoggedly Devoted completely exhausted, Justin will tease Cole as he naps on the couch, belly up.

One thing that Cole can’t do is swim, and he doesn’t like the beach. The family learned this when they visited recently at Justin’s native home of Cape Cod.

Cole had a health scare when he was about 1 year old. For a while, it was touch and go at the emergency vet. This stressful experience brought Justin andDiana closer and cemented their adoration for Cole. Diana tells us, “WhenCole was sick, it brought us together and showed us we are strong as a family.”