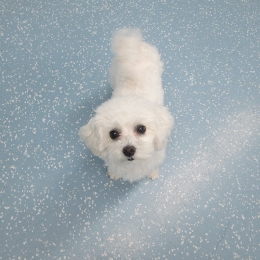 When Shrimani was looking for the right dog, she was advised not to go to the NYC Animal Care and Control because “it is dirty and depressing.” Luckily for both Shrimani and the little rescue dog she found there, Shrimani disregarded the advice:

“I found the volunteers and staff at the AC&C were sweet, and they adopt out a lot of pets every day. It wasn’t fancy, but it was the right place to be.”

Georgina (rescue name: Zoe) was sitting quietly in the small dog room in a crate on the end. Although Shrimani had not previously considered adopting a white dog, Georgina charmed her with her soft body language and her propensity for snuggling close.

Georgina was terrified in the shelter environment, and none too brave upon first coming into her new home. She mostly hid under the bed. But when Shrimani took Georgina to the park to run off-leash, Georgina sprinted around in wide circles around Shrimani: “She looked at me as if to say, you weren’t expecting this, were you?”

Georgina is never so happy as when she’s running outside, either in the country or at the beach, and she gets pretty dirty doing so. Shrimani says, “The dirtier she is, the happier she is. It took a while for me to accept that about her. That’s who she is.”

Georgina come from mysterious origins; she was found in the city and her previous history is unknown. “There are stories about great yogis and supernatural beings that were foundlings. I love that there’s something mystical about her. She remains a mystery. I wonder every day at her choices–like who she likes and who she doesn’t.”

We’ll probably never know exactly when Georgina was born, but she celebrates her birthday on June 24, a birthday she shares with Shrimani’s yoga guru, Gurumayi. Georgina is probably about 4 years old now.

Shrimani is a self-professed anglophile, and Georgina got her adoptive name from the British movie Georgy Girl. “I love how the theme of the the movie, is opening up and learning to love, and I love those English-sounding names.”

Shrimani’s journey with Georgina has been one of discovery and opening up. “The place in my life for caring for someone else is so much more expansive because of Georgina. Caring for her is beyond caring for myself or my career.”