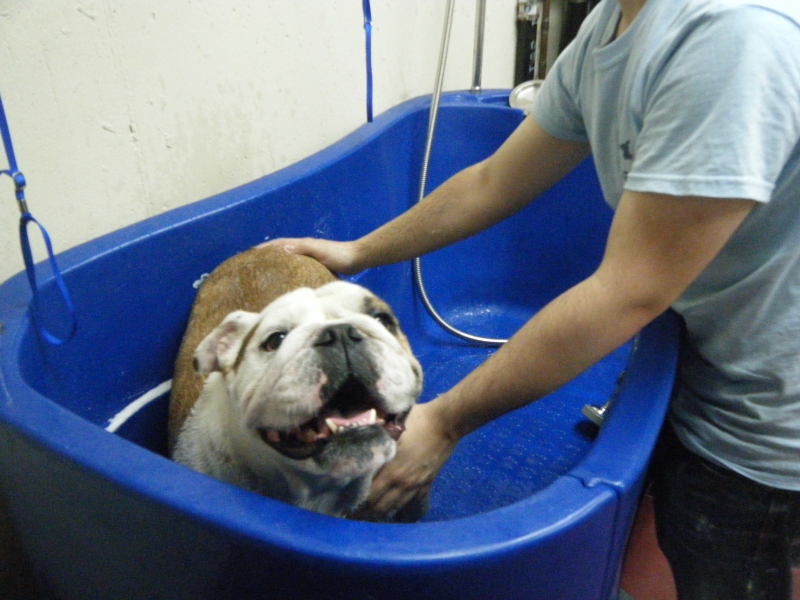 Winston, a 72-pound bulldog with one white ear and one brown ear, just might think Doggedly Devoted is a spa. He got baths there twice a week for a while because of allergies. Most dogs wouldn’t like that, but Winston jumped right in the tub for a ten-minute massage with his special shampoo.

Winston, or Winny, as his family calls him, also loves the dryer.

“He sits in front of it like he’s Marilyn Monroe with his skirt being blown up and his little ears flapping,” Doggedly Devoted staff said.

Dianne Howard and Ed Napper got Winston when he was three months old and about twelve pounds. “He was so tiny and so adorable,” Dianne said.

At three years old, Winston isn’t the baby of the family anymore. Now that honor goes to Zoë, Dianne and Ed’s eleven-month-old daughter.

“She pulls his tail, and he just lets her do whatever she wants,” Dianne said of Zoë and Winston. “He’s just amazing.”

Winston is gentle with other children, too. One recent day, four little girls started petting him in front of his building.

“He was just lying down like he was getting a spa treatment,” Dianne said.

Winston’s best friend is another bulldog named Winston, who he met on the street when the second Winston was a baby. The identical names are a coincidence. Big Winston is very protective of Baby Winston (who’s not so little himself these days).

The two of them love to wrestle. “They look like mini sumo wrestlers,” Dianne said.

At Doggedly Devoted, Big Winston also likes to pretend he is a bull, charging a towel standing in for a matador’s red cap.

At home, Winston is Dianne’s confidant. “I talk to him all the time,” she said. “He understands me.”