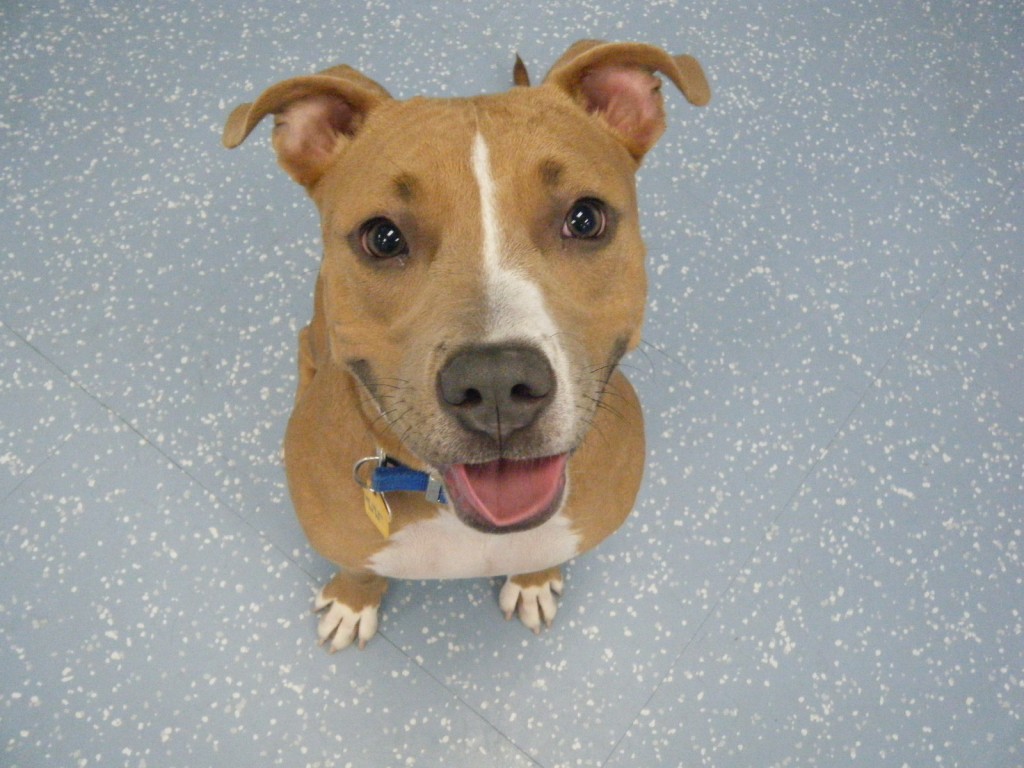 Monique and Gregory McNeil intended their trip to Animal Care & Control in September as a reconnaissance mission. They didn’t plan to take home a dog right away. And Monique was really uncertain about getting a pit bull.

Then they met Amber.

Amber is a brown pit bull with a white chest and white markings on her face and paws. She was probably about a year old at the time. They didn’t know anything about her background, which made Monique a little nervous.

But Amber was scheduled to be put down in two days.

They talked to Amber, and she tilted her head toward them. Monique got down on her hands and knees to see how Amber reacted, and the dog acted submissive. They took her for a long walk and felt comfortable with her. The McNeils decided to take Amber home immediately.

Amber is a very playful, athletic, energetic dog. She loves to play with other dogs and, at home, with her many toys and puzzles. The McNeils also got Amber her own doggie couch to match their own.

“Amber gets bored,” Monique said. “You have to engage her.”

“It’s not fair to keep her cooped up in the apartment all day,” Monique said. “When we drop her off, I tell Megan (the owner of Doggedly Devoted), ‘Wear her out.’”

Amber has given her humans some challenges.

Amber also has some anxiety about being left by herself. With the help of a behavior specialist, the McNeils developed a routine for leaving Amber alone that includes playing classical music and putting her in a thunder shirt.

“She’s a deeply affectionate dog that loves to be held,” Monique said. The thunder shirt mimics the feeling of being embraced.

That affection extends to walks with Monique and Gregory. Amber insists on walking in between the two of them.

A particularly happy moment for Amber was the large snowfall that New York received in February. Monique and Gregory took her to Central Park and let her play off leash. Her gleeful bucking and leaping in the snow reminded Monique of a reindeer, earning Amber the nickname Ambi-Bambi—or just Ambi for short.