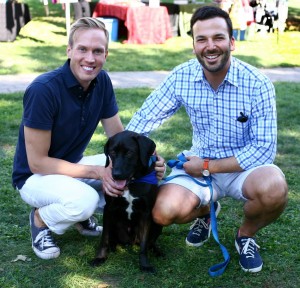 When Andrew Ahlquist and Andrew Lewis brought Claude into their lives on April 1, 2013, the rule was to be “no dog on any furniture.” Claude would have complied with this, but Andrew and Andrew decided they wanted one place where they could snuggle with Claude without sitting on the floor, so the rule became, “Claude may snuggle with humans on the orange chair.” Unfortunately for Andrew and Andrew, Claude has decided he rather prefers the orange chair all to himself. He will patiently wait on the floor for them to vacate it before jumping up for a little nap.

These early miscommunications around the orange chair now settled, Andrew and Andrew are delighted with the addition to their family.

Originally, the couple intended to adopt a puppy, and brought home a rescue named Archie. Unfortunately, Archie succumbed quickly to a case of parvo that he had contracted while in the shelter. Andrew and Andrew were devastated by this loss, but Andrew A. was ready a few weeks later to try again.

They have Claude in part because they needed to bring home an adult dog who already had sufficient immunity to the parvo that Archie had brought into their home. Both Andrew and Andrew ended up being really happy with having adopted an adult dog.

“Adopting an adult allowed us to choose a dog that fits our space, our energy level, and our lifestyle.” And they note that Claude is exactly as he was described in his PetFinder ad: “low-key, sweet, and submissive.”

Many of Claude’s friends at DoggedlyDevoted know him to be a wild player–a wrestler with a tendency to become airborne if the mood strikes him. At home, Claude enjoys short romps with his owners after breakfast and after dinner, and is otherwise content to snooze the day away.

Andrew A. says, “Andrew and I have been together for ten years, but Claude brings our family together in a different way now. There’s a new focus on caring for him that makes us even more of a family.”

Andrew L. adds, “When we moved to Harlem we got more space in our apartment. The combination of the new space and Claude means that we are more focused on home life. We’re happy to stay at home together and cook instead of going out.”