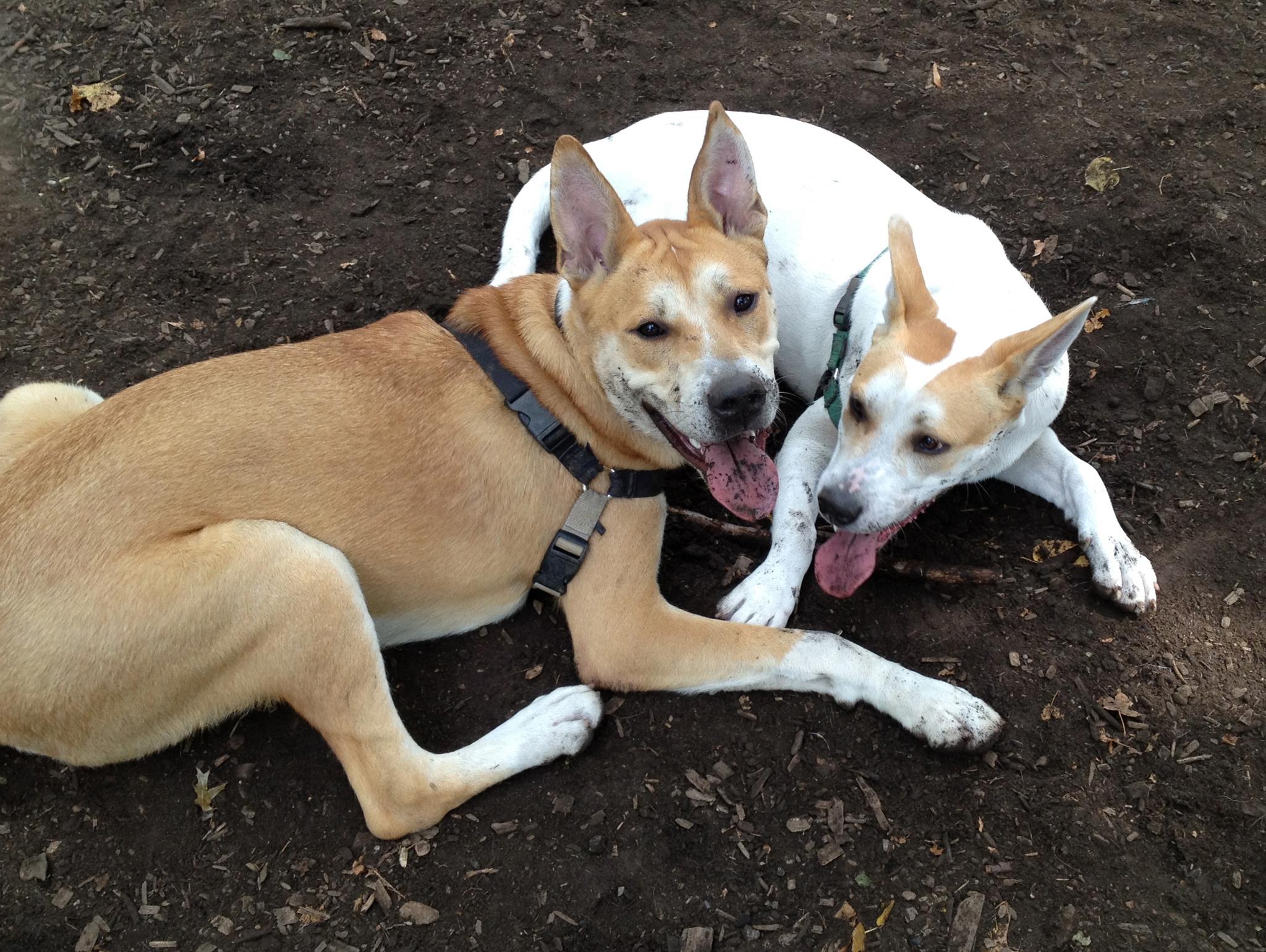 On a recent fall afternoon, there was a family reunion in the dog run at Marcus Garvey Park. Dweezil played with her brother Beckham for the first time since they both came to New York City. The littermates, now 10 months old, were orphaned at an early age in South Carolina and bottle-fed until they could make the transition to eating food and make the trip to the Big Apple when they were seven weeks old.

“They didn’t seem to recognize each other at first, but they still had a great time playing together,” said Rachel Graves, Dweezil’s owner. “But after a while they were so happy together that they just laid down and cuddled.”

Dweezil is mostly white with tan spots attractively arranged on her short white fur. Her brother is taller and heavier, with opposite coloring: white marks on tan.

Earlier this year when Rachel contacted the adoption organization Unleashed about Dweezil, she was told that the puppy was a spaniel-terrier mix and would grow to 30 or 40 pounds. When, at three months of age, Dweezil weighed 25 pounds, Rachel knew that the estimate was low. About two months later, Unleashed staff called again with news of a DNA test of one of Dweezil’s littermates: the pups are actually Akita-Bulldog-Boxer mixes. At 65 pounds, Dweezil probably has a little more growing to do.

Rachel met Dweezil the day she arrived in New York City with her littermates and the decision to adopt was immediate, even though Dweezil slept through most of their meeting. Rachel knows she made the right decision. “Dweezil is so social that I now know so many more people from the dog park and even my neighbors that don’t have dogs. Everyone knows Dweezil. I feel more connected to my community because of her.”

Dweezil also has a lot of canine friends at Doggedly Devoted, where her sociable nature allows her to play with dogs of all ages and preferred play styles. The Doggedly Devoted staff agree: “When Dweezil plays with other adolescents, she can just go and go and go all day, but she can also play with older dogs who need more down time. She’s willing to play whatever dog game the other dog wants to play, whether it’s wrestling and rolling around, or playing tug all morning. All the dogs love Dweezil. And so do all the humans.”